Get up to date information and advice when travelling

Airport noise is, understandably, a significant issue for some of our neighbouring communities. Achieving the most appropriate balance between the needs of a growing airport that serves as a major transport hub for millions of business and leisure travellers, and the rights and requirements of our nearest residential neighbours provides an ongoing challenge for Dublin Airport as it does for all airports of its size. That is why Dublin Airport is working to manage its noise impact through the implementation of mitigation measures.

Noise is subjective and personal to each individual. It is measured on a logarithmic scale with the decibel (dB) as the unit of measure. Measurements of noise are usually weighted to reflect the sensitivity of the human ear. This is referred to as “A-weighting” and environmental noise is usually measured in dB(A) units. The noise level of normal daytime urban-based activities typically varies between 40dB(A) and 85dB(A). On this scale, a change in noise level of 10dB(A) is perceived to be a doubling or halving in loudness. For example, most humans perceive a noise event of 85dB(A) to be about twice as loud as an event of 75dB(A).

Below is a decibel chart which shows the typical decibel levels of different noise sources. 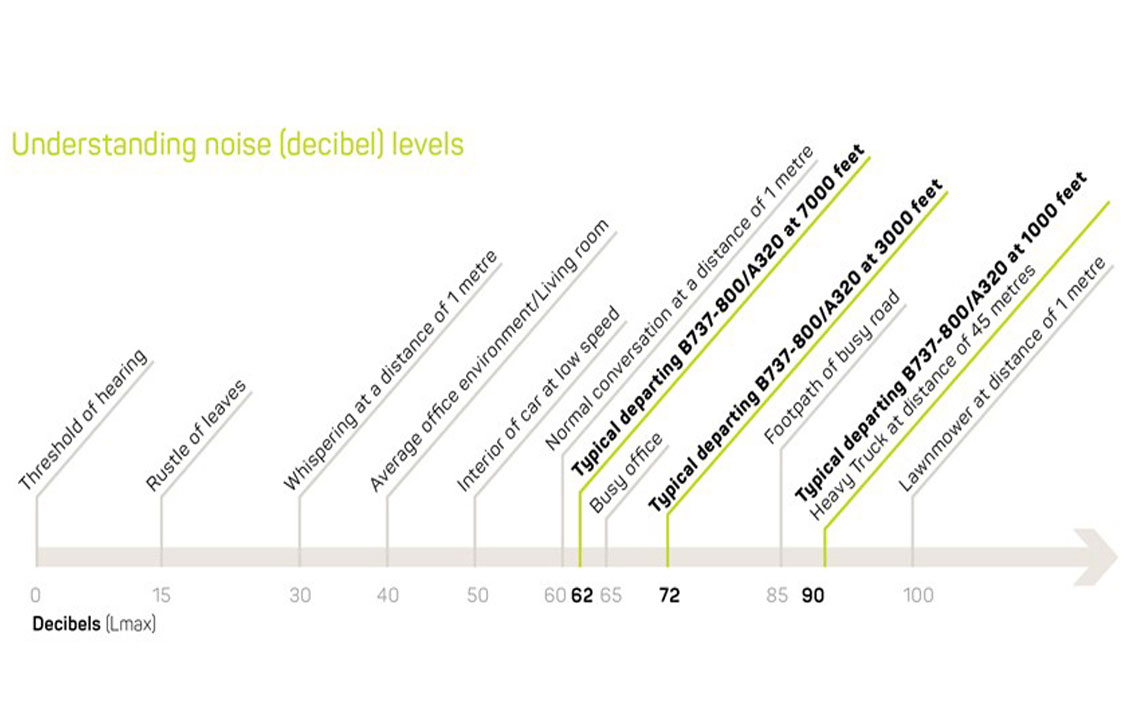 How is Aircraft Noise Generated?

Aircraft noise occurs both in flight and while the aircraft is on the ground. Below is an explanation of how both types of noise are generated.

Although noise levels vary depending on the aircraft type, they generally arise from two main sources:

Aircraft noise received on the ground is loudest during take-off and landing, and can usually be attributed to:

The amount of noise generated depends on various factors including aircraft type, size, weight and settings, altitude, the rate at which the aircraft climbs or descends and weather conditions.

Ground-based aircraft operations can also be a source of noise through activities such as taxiing and engine testing.

Dublin Airport has procedures that airlines and maintenance crews must follow to limit exposure of noise from aircraft testing to airport personnel and the surrounding communities. These include prior notification and approval of all such activities and restrictions on location, timing, duration and power settings.

How are Noise Contours Developed?

The standard method for assessing noise impacts from airborne aircraft involves the production of noise contours which illustrate the spread of noise around the airport. The contours join locations that are exposed to the same levels of noise. There are several different parameters that can be used to describe the effects of noise, many of which determine an ‘average’ level of noise across a given period.

The most commonly used unit to rate airborne aircraft noise is the LAeq unit, known as the equivalent continuous sound level, which describes the average noise received at a point over a given time.

A common pair of parameters used for this purpose are the daytime level (LAeq,16hour) and the night-time level (LAeq,8hour) for an average summer day period. These illustrate the average level, as on a daily basis there will be some variation. The summer period is used as it is usually the busiest period for an airport. The contours can be prepared at a range of values which have different levels of significance, based on aircraft movements, types and associated noise emission levels for the given period.

This approach is in line with international best practice and is used at a number of airports worldwide. Average contours for the annual period are also commonly used for strategic noise mapping and are the standard for reporting under the Environmental Noise Directive. Dublin Airport produces these contours every 5 years and submits them for inclusion in the Dublin Agglomeration Noise Action Plan.