North Runway is located 1.69km to the north, and parallel, to the existing main 10/28 runway. It is capable of handling all aircraft types up to Code F aircraft. To meet this operational brief, the runway is 3,110m long and 75m wide with a parallel taxiway located to the south connected into the existing taxiway network.

North Runway is equipped with Category III B instrument landing and airfield ground lighting systems which can facilitate automatic landing in almost all low visibility conditions. Given the location of the runway, much of the construction was delivered landside (outside the security restricted area) which allowed for greater productivity and predictability of programme.

One of the main challenges faced, however, was integrating the runway into the existing infrastructure including linking into taxiway networks, electrical and control systems, and IAA (Irish Aviation Authority) and Met Éireann navigational and meteorological systems.

The project was delivered through two main packages - the first package broadly focused on site clearance and road construction, whilst the second package covered the construction of the runway, taxiways and ancillary works.

See different aspects of the runway's construction at 'Through the Lens' booklet.

Construction Package 1 commenced in December 2016 and was completed 12 months later. This phase of the project involved the diversion of the Naul Road and comprised the construction of a 2.5km single 8m wide carriageway including a new priority junction and spur roads.

Additionally, a second section of the Naul Road required realignment which involved the construction of a 900m single 8m wide carriageway and the installation of a new priority junction.

Two new airfield viewing areas were constructed in addition to the erection of more than 14km of fencing. Package 1 also included site clearance, tree and hedgerow removal and replanting, installation of a new 200mm water main and relocation of a local monument.

Extensive archaeological site investigations of the North Runway site  were undertaken with as many as 30 archaeologists on site during the peak of the excavations. Multiple ecological surveys were also undertaken prior to commencing the works. This included surveys for badgers, bats and other species. Ecological habitat to compensate for the loss of the area was also provided. The Contractor carried out extensive; air, noise and water monitoring as well as implementing a dedicated Environmental Management Plan and Traffic Management Plan.

The reuse of excavated earth on site and environmental recycling of site byproducts was also a key feature, with initiatives such as wood from site clearance being donated to local communities and woodchip used for off-site power generation.

More than 400 staff were engaged in Construction Package 1, working more than 120,000 hours with out-of-hours activity accounting for only six days. The main contractor on North Runway’s first construction package, Roadbridge, was awarded Gold in the 2018 Considerate Constructors Scheme awards. The aim of the Considerate Constructors Scheme is to promote innovative measures in the construction industry which focus on five main categories, namely: Care about Appearance; Respecting the Community; Care for the Workforce; Protecting the Environment; and Securing Everyone’s Safety. North Runway was the first Irish registered project to win a Gold Award in the Scheme.

The main works compound was opened in January 2019 and the project was officially launched on February 14, 2019 by An Taoiseach, Leo Varadkar TD, daa Chief Executive, Dalton Philips and Minister for Transport, Tourism and Sport, Shane Ross TD.

It included the isolation, demolition and removal of all redundant services within the site, including the removal of the airport’s original 11/29 runway, ensuring optimisation of material re-use at all times. 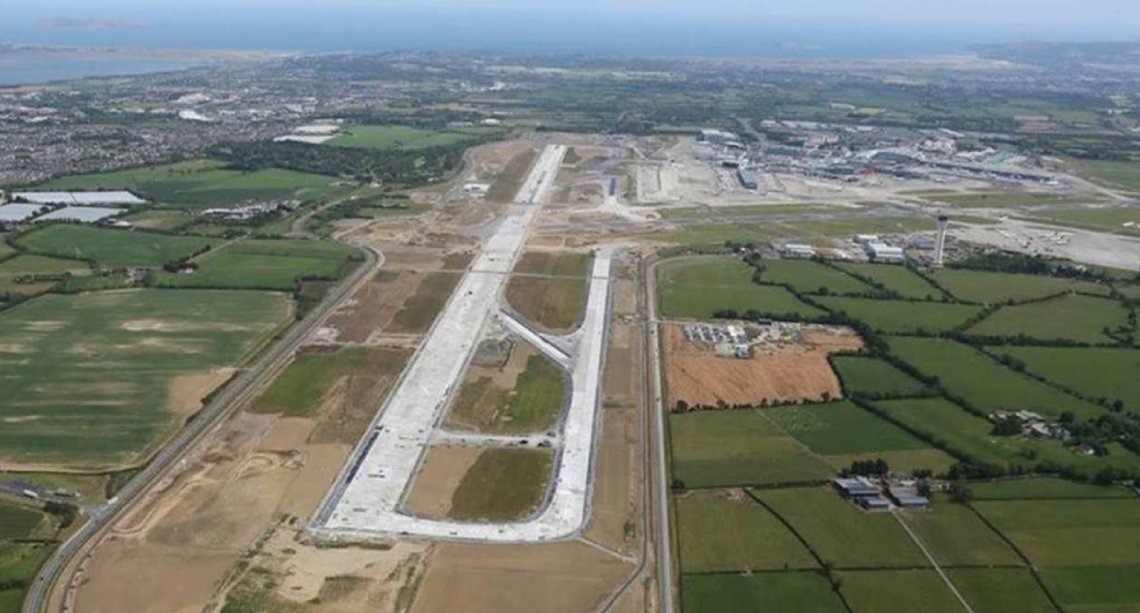