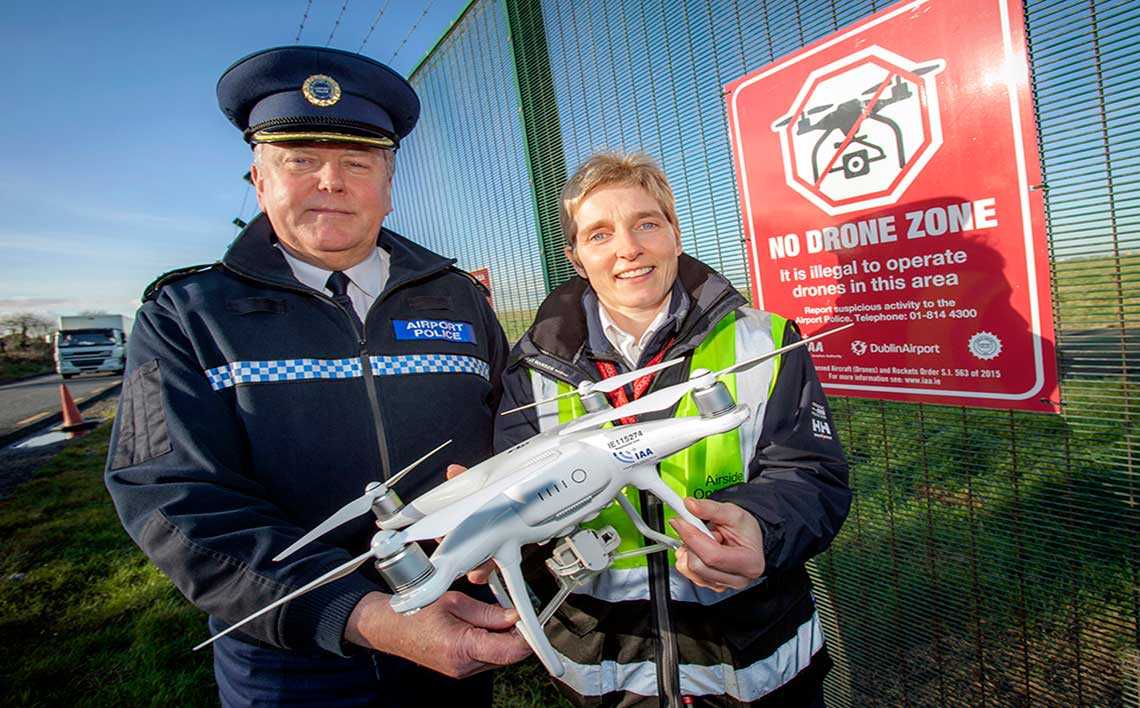 To protect the airfield, signage has been mounted on the airport’s perimeter fence indicating that Dublin Airport is a No Drone Zone and highlighting that it is illegal to operate a drone in the vicinity of the airport.

“Safeguarding the airfield at Dublin Airport is a key priority for us,” said Dublin Airport’s Chief Police Officer, Pat Bracken. “Drones are becoming an increasingly popular way to film the countryside, however, they can cause serious damage to an aircraft,” he added.

“We have been working with the Irish Aviation Authority (IAA) to keep the airfield safe from drones and signs have now been mounted on the airport’s perimeter fence to ensure we keep Dublin Airport a No Drone Zone,” Mr Bracken said.

Drones are forbidden from the airport and the airport vicinity due to the risk of a drone colliding with an aircraft or being ingested into the aircraft’s engine.

The IAA’s Director of Safety Regulation Ralph James said it very much welcomed this development at Dublin Airport. “It’s essential that the general public understand that drone activity is prohibited from taking place within the vicinity of an aerodrome for safety reasons,” Mr James added “There have been a couple of incidents of people using drones close to Dublin Airport, which have disrupted operations and drone users need to be aware of the rules for the safe operation of drones.”

All drones over 1kg must be registered with the IAA through its website HERE. The IAA encourages drone operators to familiarise themselves with the rules for drone operations to ensure that they operate their drone in a safe and responsible manner.

Dublin Airport, which is the key gateway to the island of Ireland, facilitated a record 215,000 aircraft movements in 2016.

Last year, passenger numbers at Dublin Airport increased by 11% to a record 27.9 million, which is more than four times the population of the island. Dublin was the fastest-growing major airport in Europe in 2016. Dublin Airport has direct flights to 185 destinations in 41 countries operated by a total of 47 airlines.