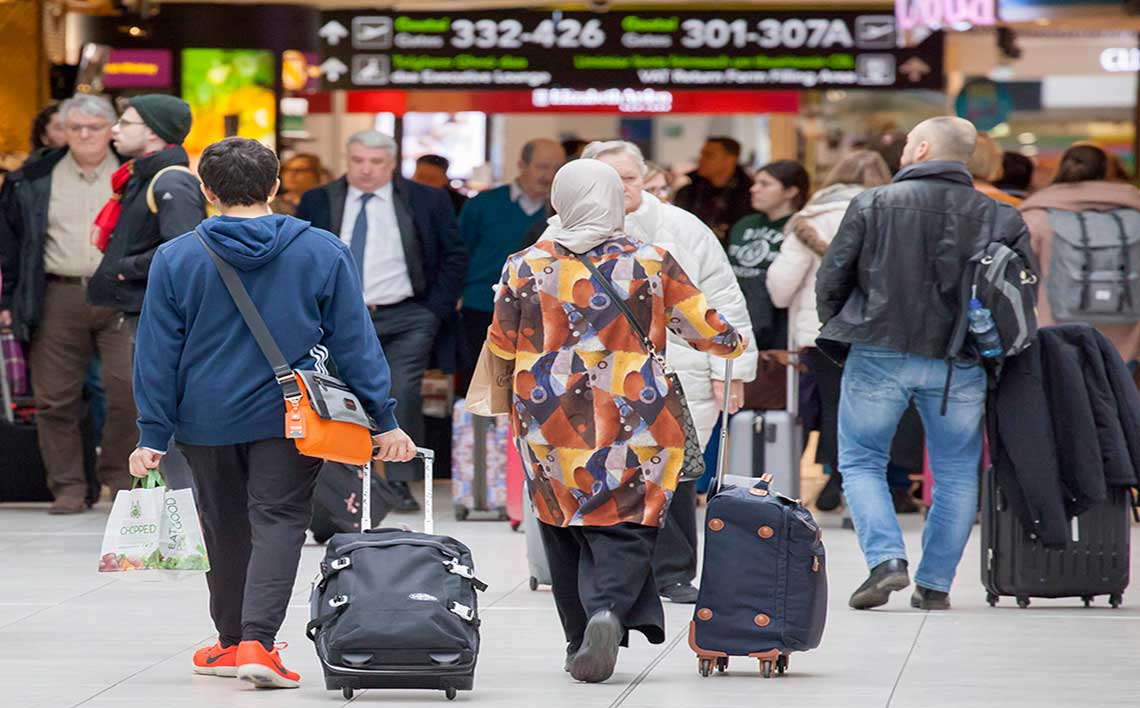 Dublin Airport welcomed a total of 31.5 million passengers during 2018, setting a new record for the airport.

Passenger numbers were up 6%, as the equivalent of more than five times the population of the island of Ireland used Dublin Airport last year. An additional 1.9 million passengers were welcomed at the airport during 2018.

About 29.4 million people started and ended their journey at Dublin Airport last year, while a further 2.1 million passengers used the airport as a hub. Short-haul traffic increased by 5% to 26.5 million, while long-haul passenger numbers increased by 15% to 5 million.

Traffic growth was underpinned by a strong performance from transatlantic and other long-haul routes, coupled with healthy growth in continental European traffic and the continued expansion of Dublin Airport as a significant gateway between North America and Europe.

“Dublin Airport enjoyed its eighth consecutive year of passenger growth in 2018 and I’d like to thank the travelling public, our airline customers, our staff and the staff of all the other companies at the airport for helping to generate yet another record year,” said Dublin Airport Managing Director Vincent Harrison.

“Dublin Airport’s record passenger numbers also boosted Irish trade and exports and helped facilitate greater levels of foreign direct investment in Ireland and by Irish companies overseas. Air connectivity is essential for the Irish economy and the provision of new and expanded services at Dublin Airport benefits the entire country.”

UK traffic increased by 1%, with almost 10.1 million passengers travelling to and from UK airports last year. UK traffic growth has been sluggish for the past two years due to the weakness of sterling amid concerns about the impact of Brexit on the UK economy.

Dublin Airport continued to strengthen its position as a key gateway between Europe and North America, with transfer passenger numbers increasing by 18% to 1.8 million last year. A new €16 million dedicated transfer facility was opened during the year, to help expand this business. A further 240,000 passengers transited through Dublin last year – i.e. they passed through the airport but did not change planes.

There were 16 new routes at Dublin Airport last year – including new services to Beijing, Hong Kong, Montreal, and Seattle – and capacity increases on 22 existing services, as airlines added flights and deployed larger aircraft on some of their Dublin routes.

This year, Dublin Airport will welcome 19 new routes. New long-haul destinations include Calgary, Dallas-Fort Worth, Minneapolis-St Paul, and Hamilton, Ontario. The short-haul network is also expanding, with scheduled flights to new destinations such as the Sardinian capital Cagliari, Kyiv, and Gothenburg.

Since 2014, annual passenger numbers at Dublin Airport have increased by 45% from 21.7 million to 31.5 million making it one of the fastest-growing large airports in Europe during that period.

To help cope with this huge growth in traffic and to also enable the airport to expand to handle 40 million passengers per year, daa is currently consulting on a major capital investment programme.

The centrepiece of the plan is a €900 million capital investment programme to deliver new boarding gate areas, aircraft parking stands and many other significant improvements. The plan also includes about €200 million in airfield works and annual investment of about €120 on repair and maintenance and revenue generating projects.

These investments will be made at no cost to the State, as while daa is State-owned, it is not funded by the taxpayer. There will also be no charge to airport users as under daa’s proposals, airport charges will remain flat during the forthcoming regulatory period.