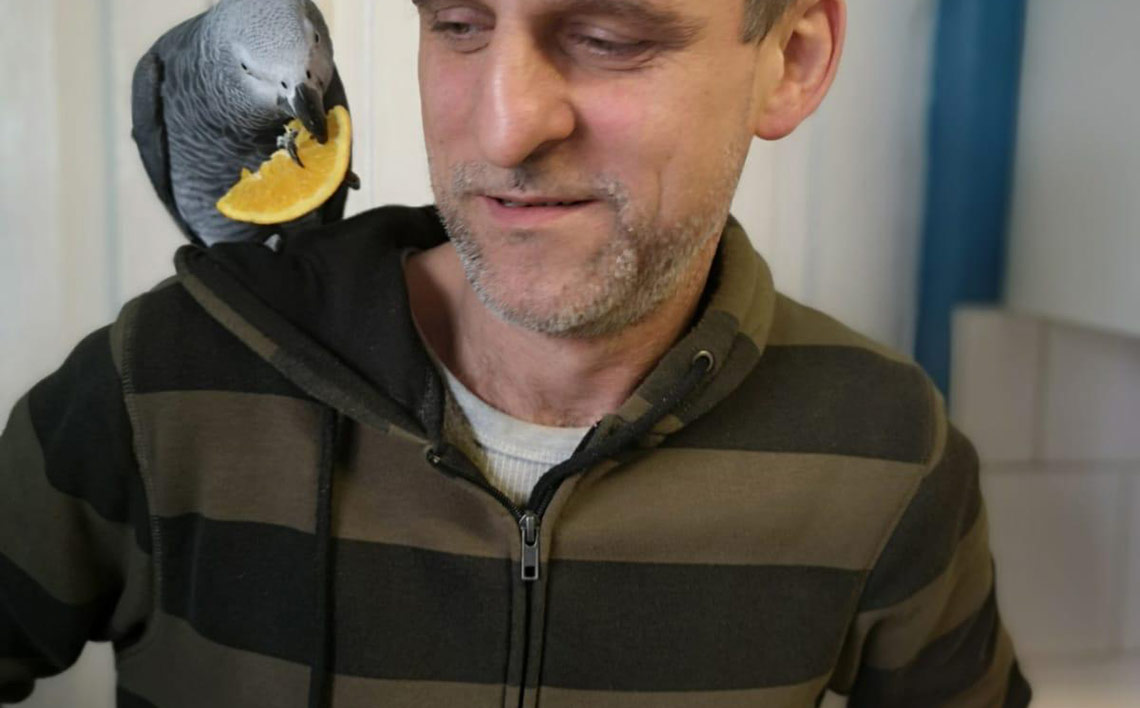 A Lidl help from a supermarket chain and a Slovak voice recording get Hugo back home.

Dublin Airport has reunited a missing African Grey parrot with its owner following a social media appeal and a little help from a German supermarket chain.

Craig and a colleague were carrying out a routine runway safety inspection at the time. “It was immediately obvious that she was a pet,” Craig said.  “A live runway wasn’t a safe place for her, so after some difficulty, we eventually coaxed her into a makeshift carrier that we made from a cardboard box and got her safely to our fire station.”

Craig contacted the Kildare Animal Foundation and they kindly agreed to care for the parrot until her owner could be found. “They were great, and couldn’t have been more helpful,” Craig said.

A social media campaign by Dublin Airport, followed by an intervention from the German supermarket chain Lidl and some novel use of modern technology then solved the mystery of the missing parrot.

The parrot’s owner Lubomir Michna said he was “so happy” to get “his baby” back and thanked Craig and his colleagues for her safe return. Lubomir said Hugo – she is a she but has a male name – had escaped from his house in Finglas at about 4pm on Saturday afternoon after a door was mistakenly left open.

Lubomir has had Hugo for two years and she goes everywhere with him – even on his shoulder when he goes shopping. According to Lubomir, something frightened Hugo last Saturday and she flew off.

Dublin Airport had used the power of its social media accounts to try to reunite the parrot and her owner and tweeted a picture to its 300,000 followers seeking the public’s help last Tuesday.

About half an hour later, Lidl Ireland’s Twitter account replied that one of its stores had a “Missing Parrot poster. They had called the number – which was Lubomir’s - and it was his parrot.

Dublin Airport and the Kildare Animal Foundation then combined to act as pet detectives in the case. Lubomir, who is originally from Slovakia, said he had taught Hugo a few words of Slovak. Dublin Airport suggested that Lubomir record an audio clip which could be played for the bird to assist with the investigation.

Dan Donoher of the Kildare Animal Foundation said it was clear from this clip that Lubomir was definitely Hugo’s owner. “When the voice recording was sent to me and I played it for Hugo she reacted instantly and became animated and excited. There was no doubt in my mind that Lubomir was her rightful owner.”

When Lubomir arrived to collect his pet, Hugo was thrilled. “As soon as the carrier was opened, Hugo jumped onto Lubomir’s arm and cuddled into his neck. You could see they have a really close bond, it was lovely,” Dan added.

Lubomir said he couldn’t be more thankful to Dublin Airport and the Kildare Animal Foundation for finding and looking after Hugo in recent days. He plans to meet Craig, the fire fighter who rescued her, shortly to offer his thanks in person.