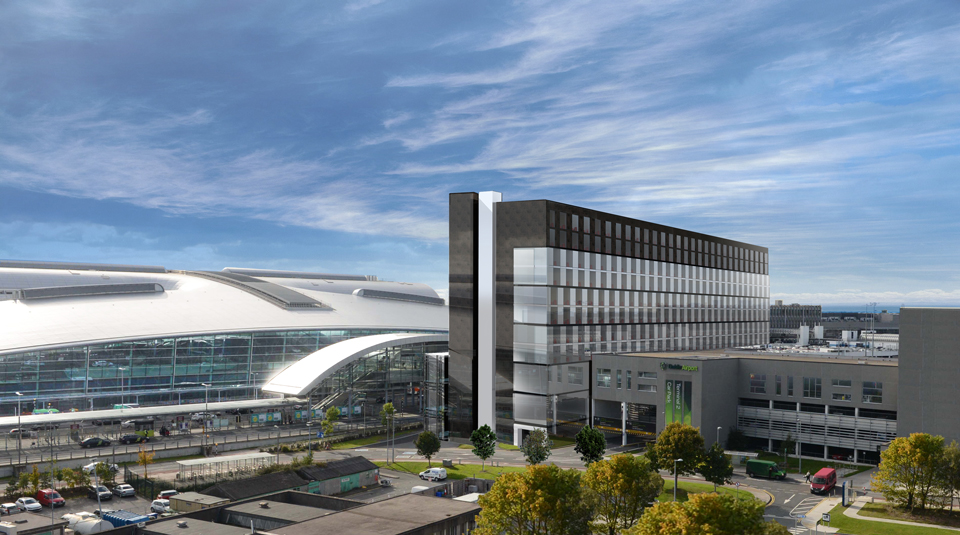 Four hundred new jobs are to be created at Dublin Airport with the opening of a new terminal-linked four star hotel which is to be built adjacent to Terminal 2.

The new hotel will provide employment for 250 people, while an additional 150 new jobs will be generated during the construction phase of the project. The new 402 bedroom property will be Ireland’s fourth largest hotel upon completion.

Planning permission for the 11-storey hotel has already been granted. Construction is expected to begin next October and the property will open in 2019.

The new hotel will have a total floor area of 22,840 square metres comprising 402 bedrooms, as well as extensive bar, restaurant, café and conference facilities and a fitness suite. It will occupy a prime 0.81 acre site between Terminal 2 and the T2 multi-storey car park – and will be located just 95 metres from Terminal 2.

daa has appointed property consultants Savills Hotels & Leisure to seek expressions of interest for the development and operation of the new hotel, which will be developed under a Finance, Build Operate and Transfer (FBOT) model. The successful bidder will construct the hotel and operate it for a specified period of time, before transferring it back to daa at the end of the agreed term.

“There is significant demand for a new terminal-linked hotel at Dublin Airport and this development will benefit not just the airport but the city and region as a whole as Dublin needs more hotel beds,” said Dublin Airport Managing Director Vincent Harrison. “It will also provide employment for 250 people, as well as a further 150 construction jobs during the building programme, which is expected to last about 18 months,” Mr Harrison added.

“We’re constantly striving to improve the product that we provide to our customers and this new hotel will offer extra choice and convenience to passengers and to the many companies that are based on the Dublin Airport campus,” Mr Harrison said. “It will also provide much needed additional hotel capacity for the entire Dublin region.”

Between 2010 and 2015, only four hotels comprising 594 bedrooms were built in Dublin. The Irish Tourist Industry Confederation (ITIC) warned last year that that Dublin requires a further 5,000 hotel bedrooms by 2020 to meet demand.

Savills Ireland Director of Hotels & Leisure Tom Barrett said that there was likely to be significant market demand for the new Dublin Airport hotel development. “This is a hugely exciting project. If this hotel was trading today, it would be one of the strongest performing hotels in Ireland. Given the unique high profile location and the quality of the offering we anticipate strong interest from developers, investors, hoteliers and brands.”

According to hotel benchmarking data from STR, Dublin Airport hotels recorded revenue per available room growth of 27% in 2015 and 19% in the nine months to the end of September this year. Monthly occupancy levels of more than 90% were achieved in four months of 2014, increasing to six months in 2015 and seven months this year. STR data also reveals that hotels with over 1,600 bedrooms in the vicinity of Dublin Airport recorded 98% occupancy for the 30 days of September and occupancy levels of 90% so far this year.

Dublin Airport set a new record for passenger numbers last year when it welcomed more than 25 million people. Traffic has increased by a further 12% this year and Dublin Airport is currently the fastest growing major airport in Europe.

The airport directly supports almost 15,000 jobs on campus and a total of 97,400 jobs in the wider Irish economy. It is worth €6.6 billion to the Irish economy and is the single biggest generator of economic activity in the State.