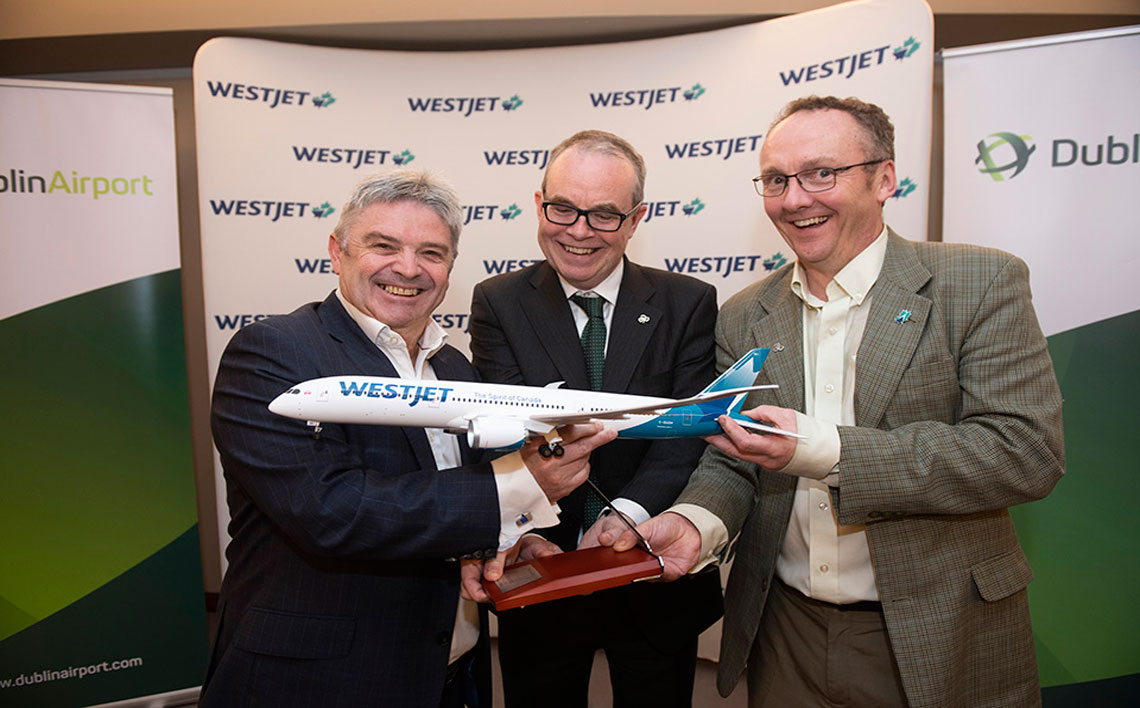 Share
Dublin Airport is delighted to welcome WestJet’s new three times weekly direct service to Calgary in Alberta, Canada.
The new route will be operated with a Boeing Dreamliner aircraft and is the only scheduled service between the two cities.
WestJet’s new Calgary service will also offer onward connections to 24 destinations including Vancouver and Las Vegas.
“We have forged a strong bond and friendship with WestJet and we are delighted to welcome its new direct service between Calgary and Dublin Airport,” said Dublin Airport Managing Director Vincent Harrison.
“Dublin Airport is now connected to six Canadian cities which means that this year is set to be our busiest year ever for travel between Dublin and Canada. I have no doubt this new service will be popular in both directions for business and leisure passengers.  We wish WestJet every success with its new route and we will continue to work closely with them to promote the new service,” he added.
WestJet’s Chief Commercial Officer Arved von zur Muehlen said “With the launch of our third transatlantic Dreamliner flight, WestJet adds to our exceptional growth into and out of Calgary, where we remain the airline with the most destinations and departures. With more than 4.5 million Canadians claiming Irish heritage, we are pleased to be providing our guests with easy access to all the cultural, economic and social ties between Western Canada and Ireland.”
WestJet, which is Canada’s second largest airline, is headquartered in Calgary and operates about 725 flights daily to 105 destinations.  Dublin was WestJet’s first ever transatlantic destination, as the airline launched its Dublin-St. John’s Newfoundland service in the summer of 2014.
The airline switched its services between Dublin and St. John’s to a six times weekly service to Halifax in April this year.
The new Dublin-Calgary route will operate from Dublin three times per week on Sunday, Monday and Thursday.  Flights will depart at 13.45 and arrive in Calgary at 15.05.  The return flights will depart Calgary on Saturday, Sunday and Wednesday at 20.45 and arrive in Dublin at 11.38 the following day.
Calgary is one of six Canadian destinations served directly from Dublin Airport this summer; joining Toronto, Montréal, Vancouver, Halifax and Hamilton, Ontario.  Dublin Airport will also have direct services to 18 destination in the US this year as part of its largest ever transatlantic offering.
Ireland and Canada have strong and enduring cultural and business links.  About 14% of Canada’s population is of Irish descent and more than 70 Canadian firms have businesses in Ireland, employing a total of more than 13,000 people.
More than 9.3 million passengers have travelled through Dublin Airport in the first four months of this year, a 7% increase over the same period last year. Dublin Airport has welcomed more than 650,000 additional passengers in the first four months of 2019.
Dublin Airport has flights to almost 200 destinations in 43 countries, operated by 53 airlines and is the 11th busiest airport in the European Union.
Image above: daa Senior VP Aviation Business Development, Jon Woolf, Ireland Ambassador to Canada, Jim Kelly and WestJet Executive Vice President People & Culture, Mark Porter at the launch of WestJet's new direct service between Calgary and Dublin.