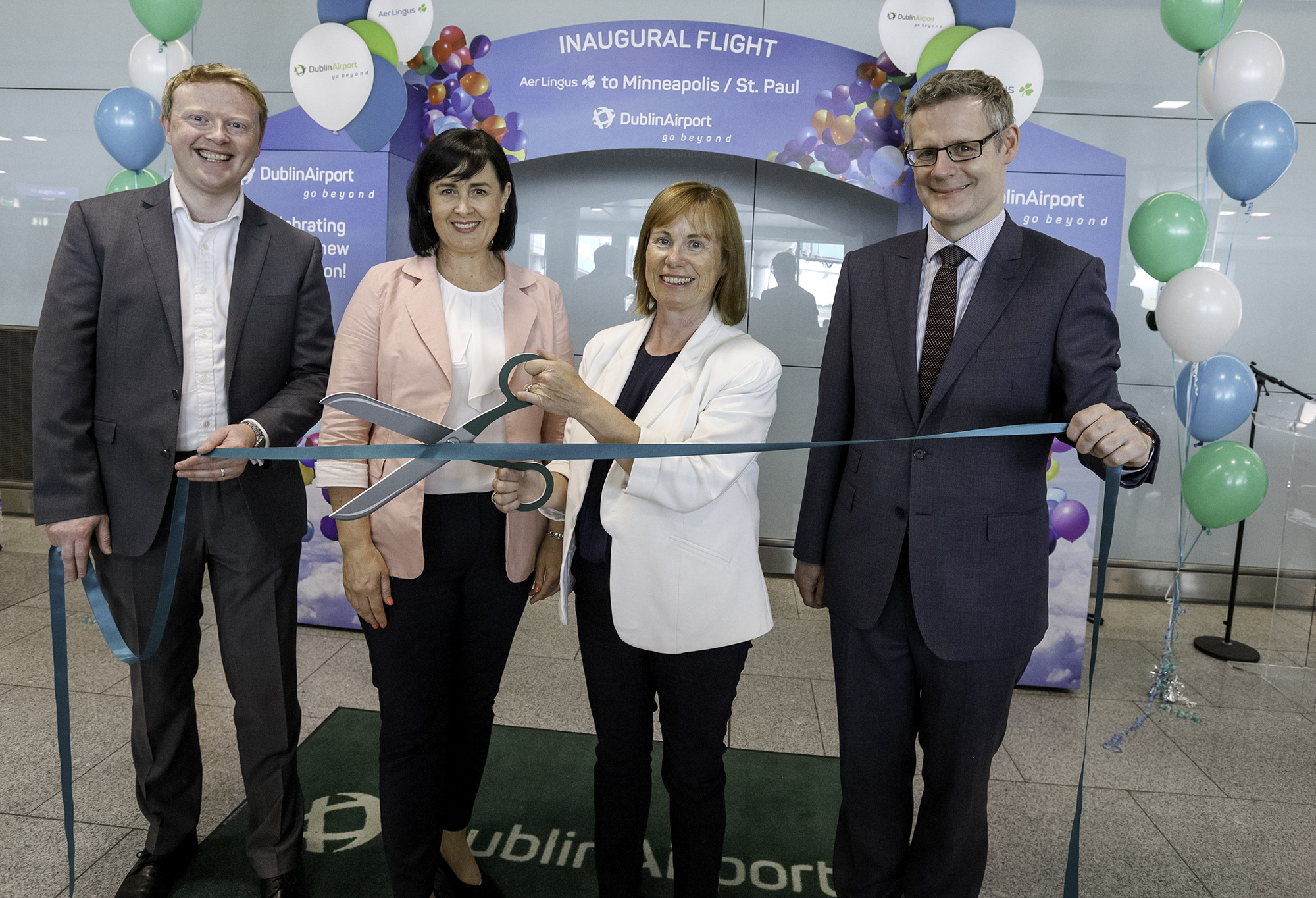 Share
Dublin Airport welcomes Aer Lingus’ inaugural direct service to Minneapolis-St. Paul in Minnesota.
Aer Lingus’ new route will initially operate six times weekly, increasing to a daily, year-round service from this August.  The new service will be operated with a Boeing 757 aircraft.
Dublin Airport Managing Director Vincent Harrison said the new route will further grow tourism and trade between Ireland the US.  “This is Aer Lingus’ 14th transatlantic route from Dublin Airport and its 11th new transatlantic route in the past five years.
“We have been working closely with Aer Lingus since 2014 to grow its North American business and build a substantial transfer business. The new route offers customers significant onward connections in both directions.”
Marking its inaugural flight to Minneapolis-St. Paul, Aer Lingus’ Chief Executive Stephen Doyle “We are delighted to commence Ireland’s first and only direct service to Minneapolis-St. Paul, Minnesota State.  The Minneapolis-St. Paul region holds great promise for Aer Lingus particularly in terms of the connections we can offer to UK and European guests as well as those travelling from North America and onwards to Europe.”
Passengers travelling on Aer Lingus’ new service to Minneapolis-St. Paul will use US Pre Clearance facilities at Dublin Airport meaning passengers save time on arrival in the US by completing all the necessary immigration and customs checks prior to departure.  The only queue a pre-cleared passenger encounters on arrival in the US is the taxi queue to their final destination.
This new route means that Dublin Airport now has nine airlines flying 464 flights per week to and from 18 destinations in the US and six destinations in Canada, which equates to an average of 66 flights daily to and from North America.
Dublin Airport is a major economic asset that supports or facilitates a total of 117,300 jobs – including 19,200 jobs on campus – and contributes €8.3 billion annually to the Irish economy. Continued growth in connectivity and passenger numbers at Dublin Airport generates increased economic activity throughout Ireland.
So far this year, more than 12.3 million passengers have travelled through Dublin Airport, a 7% increase compared to the first five months of last year.
Dublin Airport has welcomed an additional 764,000 passengers between January and May.
Dublin Airport has flights to almost 200 destinations in 43 countries, operated by 53 airlines and is the 11th busiest airport in the European Union.
Image above: Dublin Airport Aviation Business Development Manager, Stephen O'Reilly and Head of B2B & Partner Marketing, Edel Redmond celebrating the new route with Aer Lingus Chief Corporate Affairs Officer Donal Moriarty and Director of Marketing & Digital, Dara McMahon.