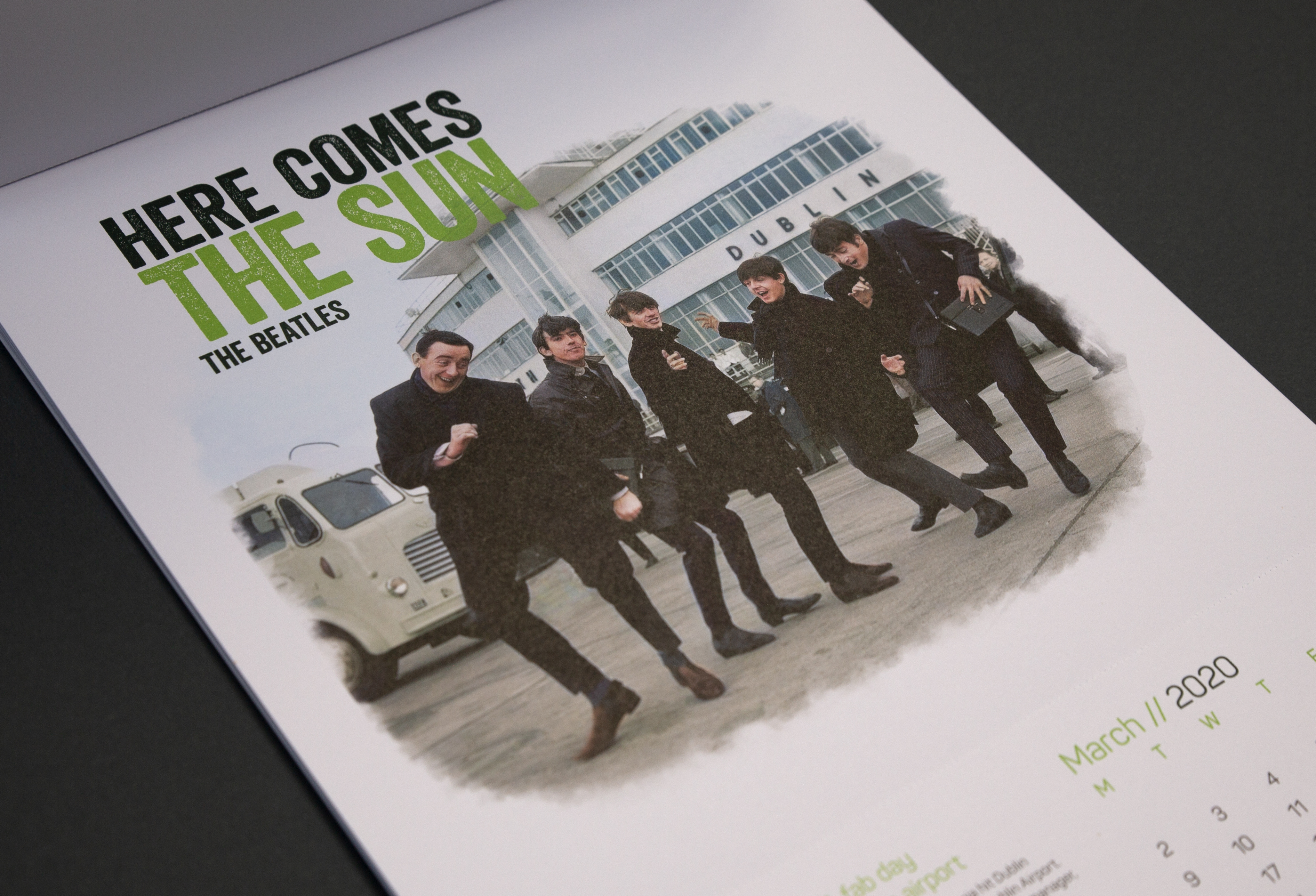 Dublin Airport has produced a commemorative calendar celebrating its 80th birthday which occurs on January 19, 2020.

The calendar has 12 iconic images including famous sports and political figures arriving at Dublin Airport during the past eight decades. It features famous historic moments such as President John F Kennedy’s visit, the Beatles’ arrival for two concerts at the Adelphi Cinema, and the return of the Ireland team after Italia 90.

Dublin Airport opened on Friday, January 19, 1940 at 9am when the very first commercial flight, an Aer Lingus Lockheed 14 aircraft, departed for Liverpool.

Almost 80 years later, Dublin Airport is a thriving international airport handling more than 31.5 million passengers and in 2018 over 233,000 flights a year.

“Dublin Airport has played a critical part in connecting Ireland to the world and has welcomed visitors from all over the globe to Ireland since that first flight took off on January 19, 1940 so it’s fitting that we celebrate this significant milestone in the airport’s history,” said Dublin Airport Managing Director Vincent Harrison.

“To mark this special year, we have produced a beautiful calendar with a series of photos from the past eighty years.  The calendar has a unique feature, as it has been designed in a way that any of the images can be easily framed and displayed so it can be appreciated for many years to come.”

Whether you love old photos, if you’re an aviation enthusiast or you fancy a trip down memory lane, the calendar is a wonderful gift idea this Christmas.  It can be purchased for €10 in Dublin Airport’s retail area The Loop with all proceeds generated from the sale going to Dublin Airport’s 2019 charity partners: Debra Ireland, Gary Kelly Cancer Support Centre and Spina Bifida Hydrocephalus. The calendar is available for purchase online via The Loop for those taking a flight and for those not travelling, it can also be bought at the Shop & Collect desk in the Arrivals area of Terminal 1.

Debra Ireland was set up in 1988 by families living with the painful, genetic skin condition epidermolysis bullosa (EB) who had no support. The organisation is committed to doing all it can for people in Ireland living with EB.

Spina Bifida Hydrocephalus Ireland was established to provide family and community support for every person affected by spina bifida and hydrocephalus so they can lead a fulfilled life.

The Gary Kelly Cancer Support Centre is a centre for people living with cancer.  It offers holistic and complementary therapies, education and psychological support for people with cancer.

“Eight decades on since that historic first flight, Dublin Airport is now the international gateway to island of Ireland with flights to almost 200 destinations in 43 countries, operated by 53 airlines and is the 11th busiest airport in the European Union. It is one of Ireland’s key economic assets, as it generates or facilitates 117,300 jobs and €8.3 billion worth of economic activity,” Mr Harrison said.

Dublin Airport will mark its eightieth anniversary in a variety of ways throughout 2020, sharing archive photos, memorabilia and experiences from those who worked and travelled through the airport during that time.