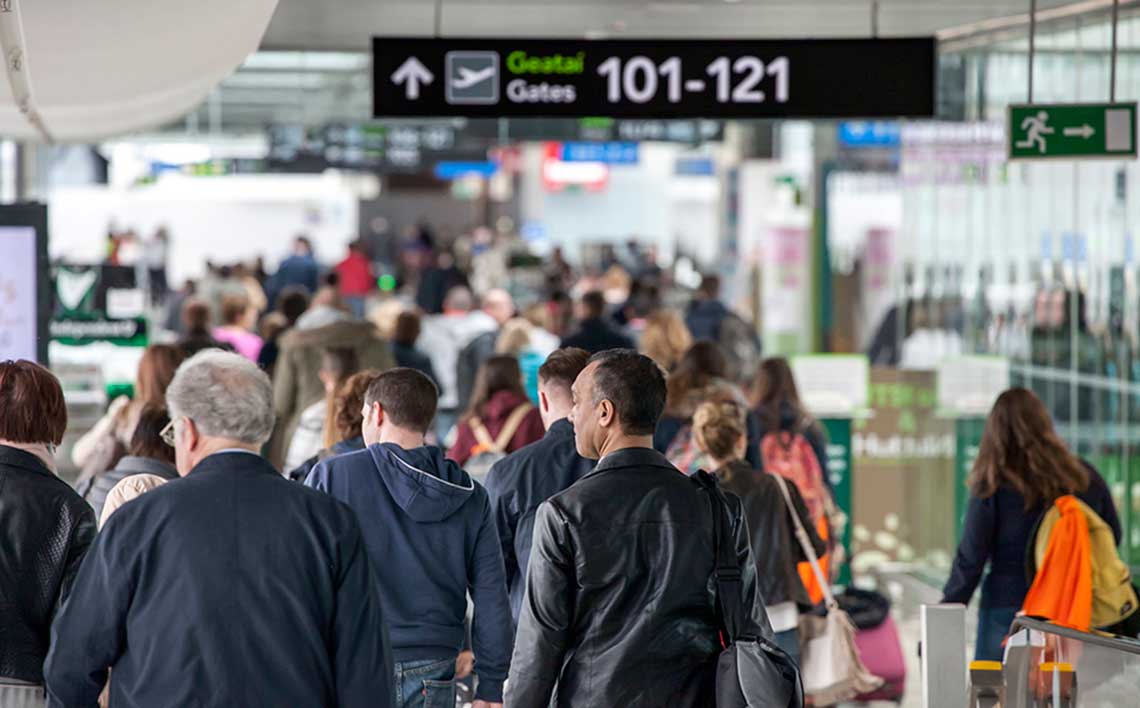 Dublin Airport welcomed a total of 32.9 million passengers during 2019, setting a new record for traffic at the airport.

About 30.7 million people started and ended their journey at Dublin Airport last year, while almost 2.2 million passengers used the airport as a hub.

Dublin Airport is celebrating its eightieth birthday this year and more than 580 million passengers have been welcomed at the airport since its official opening on January 19, 1940.

Passenger numbers were up 4% during the year, as a stronger first half performance gave way to more modest growth in the later part of the year. An additional 1.4 million passengers passed through the airport during 2019.

Short-haul traffic increased by 5% to 27.7 million, while long-haul passenger numbers increased by 4% to almost 5.2 million.

The transatlantic and European markets were the best performing sectors during the year. UK traffic increased slightly, while traffic to other international destinations, which includes the Middle East, Africa and Asia, was flat.

Dublin Airport is now the fifth largest airport in Europe for transatlantic connectivity and this growth has been underpinned by the increasing numbers of connecting passengers who are choosing to fly through Dublin.

“Dublin Airport had its ninth consecutive year of passenger growth in 2019 and this has had a hugely positive impact on the entire Irish economy,” said Dublin Airport Managing Director Vincent Harrison.

A new study has found that Dublin Airport supports or facilitates almost 130,000 jobs in the Republic of Ireland and contributes a total of €9.8 billion in Gross Value Added (GVA) to the Irish economy.

“The connectivity provided by Dublin Airport is essential, as the Irish economy is one of the most open in the world,” according to Mr Harrison. “Our economy depends on trade, exports, inbound tourism and foreign direct investment and Dublin Airport is delighted to be able to facilitate these key sectors.”

UK traffic increased by 1%, with almost 10.2 million passengers travelling to and from UK airports last year. Traffic to London performed better than services to UK regional destinations, which has been a pattern in recent years.

Dublin Airport continued to expand its position as a key gateway between Europe and North America last year. Transfer passenger numbers increased by 5% to 1.9 million last year. In addition, about 235,000 passengers transited through Dublin last year – i.e. they did not change planes.

There were 25 new routes at Dublin Airport last year – including new long-haul services to Calgary, Dallas-Fort-Worth and Minneapolis-St Paul and new short-haul services to Bodrum, Kyiv, Lourdes and Thessaloniki. There were capacity increases on 28 existing routes, as airlines added flights to their schedules or operated services with larger aircraft.

This year, Dublin Airport will welcome 12 new routes. New long-haul services for summer 2020 include Shanghai via Helsinki with Juneyao Air and San Francisco with United Airlines. New short-haul destinations include Cairo with EgyptAir, Marseille with Ryanair, Rhodes with Aer Lingus, and Tel Aviv with El Al.

Dublin Airport has flights to more than 190 destinations in 42 countries operated by almost 50 airlines. It is the tenth largest airport in the European Union.