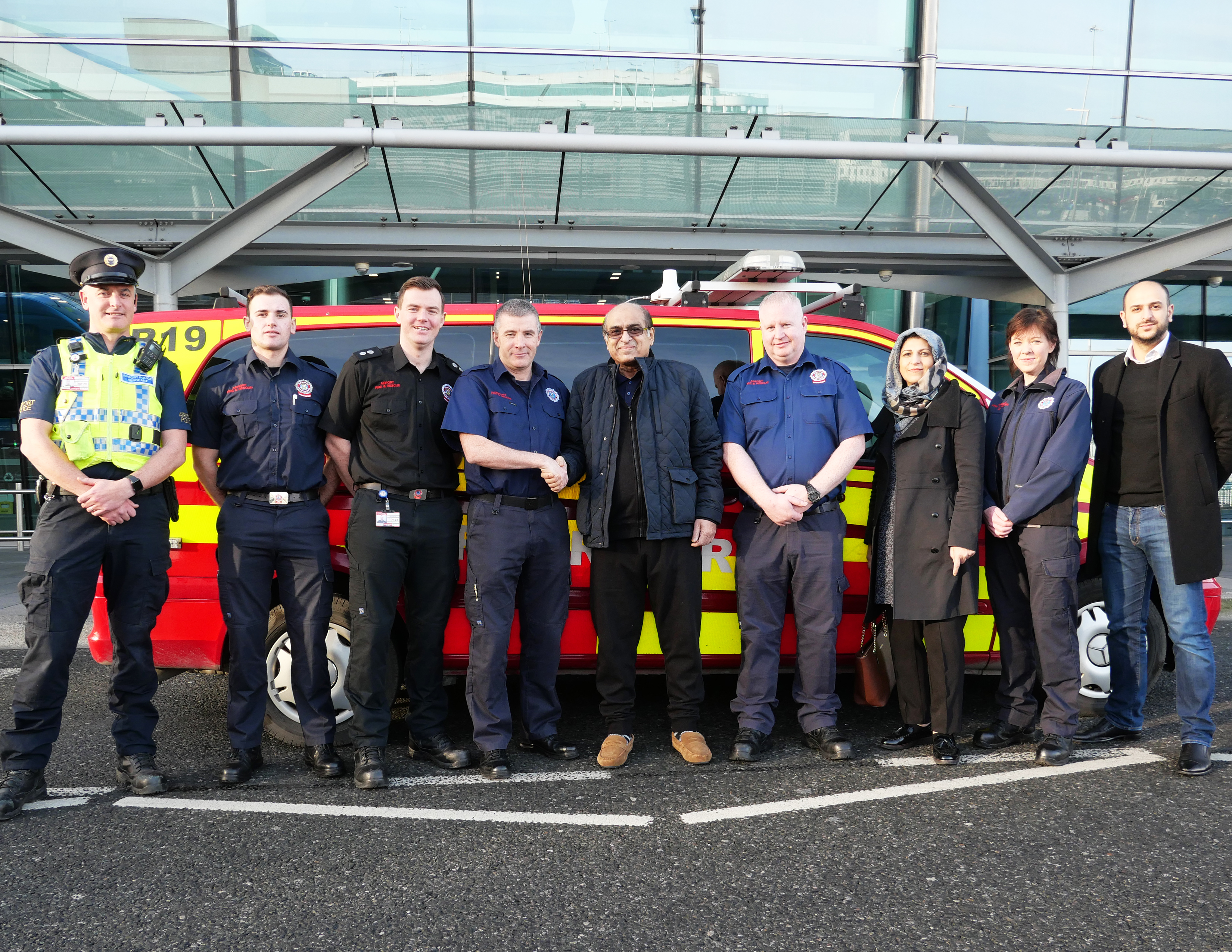 Dublin Airport’s defibrillator CPR programme has helped save the life of a Consultant Cardiologist.

The airport’s defibrillator CPR programme, which has saved 32 lives since it was first introduced in 2003, has recently been strengthened with the addition of two fully trained advanced paramedics to the Dublin Airport Fire Service response team, with two more advanced paramedics currently in training.

The airport’s advanced paramedics were tested recently when a passenger arriving from the UK experienced a serious cardiac event in Terminal 2.

Dr. Farqad Alamgir, who is a Consultant Interventional Cardiologist, was travelling from Manchester to Dublin Airport on a regular trip to Ireland, where he works in a number of hospitals, when he took ill.   He was initially tended to by an Aer Lingus staff member who administered CPR until Airport Police and Fire Service responders arrived
.
Dublin Airport’s advanced paramedics administered life-saving drugs at the scene before transferring Dr. Alamgir to the Mater Hospital in Dublin, where he underwent emergency heart bypass surgery.

Dr. Alamgir has worked for 30 years resuscitating many patients who present with acute heart attacks, but never imagined he find himself on the other side of the fence. “I remember getting off the aircraft at Dublin Airport, then the next memory I have is waking up in the Coronary Care Unit in the Mater Hospital,” said Dr. Alamgir.

“I now know that Dublin Airport’s first responders used the Lucas CPR system giving me four shocks initially, then the skills of their Advanced Paramedic team administered urgent advanced life-saving drugs via an intraosseous needle into my shin, bringing me back after 17 minutes of downtime.  The speed of the response not only saved my life, but the resuscitation was so effective that I have not suffered any neurological or cardiac muscle damage.”

Dr. Alamgir said, he was “so grateful and thankful to the team at Dublin Airport, the ambulance crews and the team at the Mater for giving me another opportunity to spend more time with my family”.

Dublin Airport Chief Fire Officer Gerry Keogh said it was hugely rewarding and humbling when a passenger walks through the door to thank the team for saving their life.

“Our defibrillator programme began in 2003 and since then we have increased our defibrillator numbers to over 50 around the airport’s campus. We also have two fully-trained advanced paramedics and two in training, and their new skills greatly enhance the emergency medical response to any incident at the airport.

“We were absolutely delighted to welcome Dr. Alamgir back to Dublin Airport.  It’s a testament to the training, professionalism and team work of the airport’s first responders that he was in a position to come back and meet those who saved his life.”

Mr Keogh said that every life saved by the defibrillator programme had a profoundly positive impact on a wide range of people.

Dublin Airport welcomes an average of 100,000 passengers per day during peak season.  It has flights to more than 190 destinations in 42 countries operated by 50 airlines.