The impact of the COVID-19 pandemic has cost daa an estimated €160 million in lost turnover so far and will see the company record significant financial losses this year.

daa has operations in 16 countries and the global pandemic has affected all of its businesses. Traffic at Dublin and Cork airports has collapsed, as passenger numbers have fallen by 99% in April and May. While the two airports had enjoyed a positive start to the year in terms of traffic growth, the sharp fall in travel in recent months means that overall 2020 passenger numbers have already declined by 55% and will fall further.

daa’s overseas businesses have also felt the brunt of the collapse in international aviation, as all but one of its ARI travel retail operations have been shuttered. Domestic flights in Saudi Arabia, where daa international operates a terminal at King Khalid International Airport (KKIA) in Riyadh, were totally suspended in March and only began to resume on a phased basis earlier this week.

With almost no passengers and no shoppers in its airport retail outlets, daa is currently losing €1 million per day, according to the company’s Chief Executive Dalton Philips. A very significant cost reduction programme is currently underway to address the issue. Costs have been cut across the business, staff have been placed on a four-day week, and a right-sizing programme is in progress.

“This is the most serious crisis that has ever faced the international aviation sector and our business,” Mr Philips said. “Our business and the wider sector have weathered many previous upheavals, such as the recent recession, the impact of September 11, and the 1970s oil crisis, and it will eventually recover from the economic impact of COVID-19. But it is likely to take some time as the short-term future is bleak, and the post COVID industry will be very different.”

Since Ireland entered lockdown in mid-March, almost 31 million kilogrammes of cargo has been facilitated at Dublin Airport, including almost 3.7 million kilogrammes of personal protective equipment (PPE) and medical supplies. The airport has facilitated 1,635 dedicated cargo flights during that period, including 216 flights bringing PPE/medical supplies to Ireland, 214 of which were from China.

“As an essential service, a skeleton staff at Dublin and Cork airports helped ensure that Ireland could receive the vital medical supplies it required to assist in the fight against COVID-19 and other crucial cargo for the economy,” Mr Philips said.

“When Dublin and Cork airports last had that level of passenger numbers, they had between 750 and 1,000 fewer employees, so unfortunately we have to take unpalatable measures to lower our costs across all areas of the business,” Mr Philips added.

daa has placed employees on a four-day week and a programme is underway to right-size the business through a voluntary severance scheme, career breaks and reduced hours working. Changes in work practices are also being introduced to keep passengers and staff safe in a post COVID-19 environment and also to make the business more effective.

Due to the economic impact of COVID-19, daa’s Board has not recommended the payment of a dividend for 2019. All capital spending is being reviewed and the delivery timescale of certain planned upgrades at Dublin Airport will be reconsidered.

Essential projects, such as Dublin Airport’s new North Runway and the upgrade to hold baggage screening systems at Dublin and Cork airports – which is a regulatory requirement – will continue. daa will also seek planning permission for future works during the downturn.

“Ireland should not make the mistakes of the past when it comes to building key pieces of national infrastructure,” according to Mr Philips. “North Runway will help boost Ireland’s economic recovery and airport operators need to plan for decades ahead for the benefit of the national economy rather than just manage through the current difficulties. During the last downturn, some commentators argued that we should stop building Terminal 2, or that it was a white elephant. Last summer, T2 was effectively full, and it will be full again. Our assets have forty or 50-year lives, and certain parts of Dublin Airport are up to 80 years old.”

During the lockdown, daa has been preparing for the eventual phased resumption of business. Both Dublin and Cork airports have undergone deep cleaning and the airports have been transformed in light of requirements post COVID-19. “The way in which the public will interact with our airports will change dramatically and as always, we will be putting the safety of passengers and all those who work at our airports first.”

daa’s results for 2019, show that turnover increased by 4% to €935 million, as growth in the Group’s domestic revenue, which accounts for more than two-thirds of daa’s overall business, was slightly ahead of overseas growth.

Earnings before interest, taxation, depreciation and amortisation (EBITDA) increased by 4% to €302 million for 2019. Profit for the year before exceptional items increased by 13% to just over €150 million.

Operating costs increased by 5% to €446 million during the year, with non-pay costs increasing faster than payroll related costs. Net debt was further reduced during 2019, declining by 2% (€11 million) to €430 million.

Total passenger numbers for Dublin and Cork airports increased by 5% to a record 35.5 million last year. Dublin Airport had its ninth consecutive year of passenger growth, while Cork Airport, which was the State’s fastest-growing airport in 2019, had its fourth successive year of increased traffic.

daa is a global company with businesses in 16 countries including Ireland, Bahrain, Canada, Cyprus, India, Lebanon, and New Zealand. Its airport business operates Dublin and Cork airports in Ireland, and Terminal 5 at KKIA in Riyadh, Saudi Arabia. It also has investments in Düsseldorf Airport in Germany and in Larnaca and Paphos airports in Cyprus. Its travel retail business Aer Rianta International (ARI) has outlets in 12 countries.

Images above and below: Ryanair and Aer Lingus aircraft parked at Dublin Airport during the COVID-19 global pandemic. 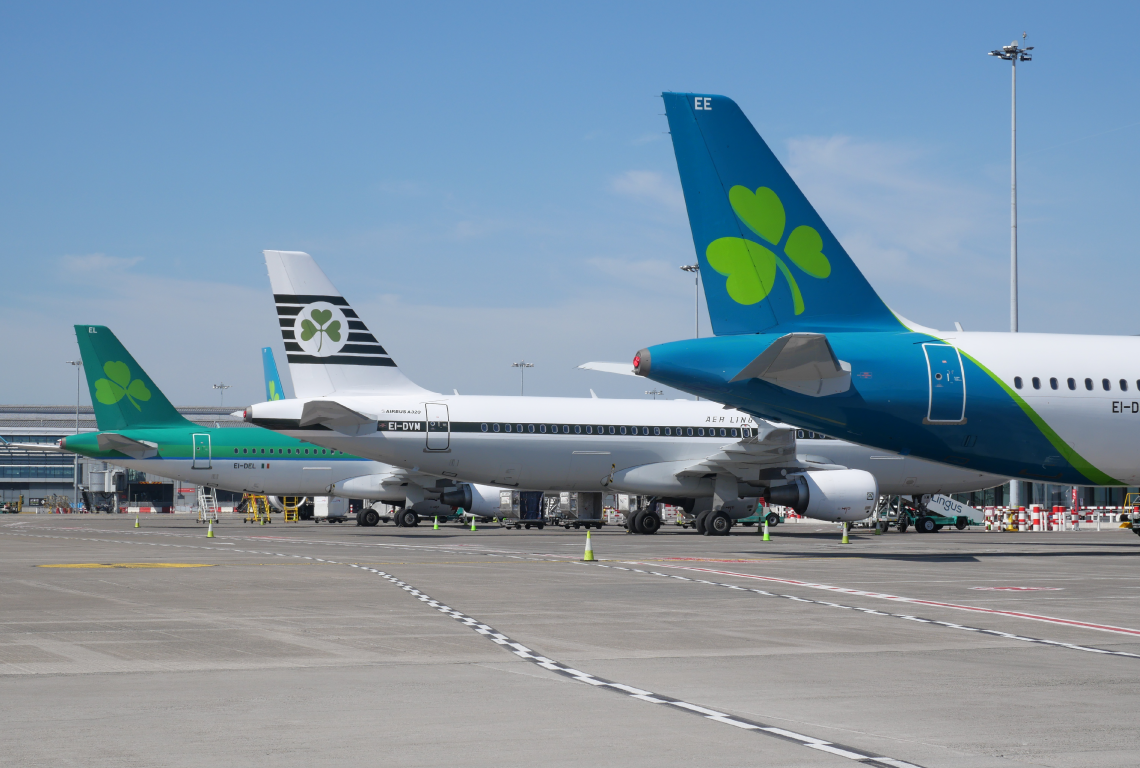