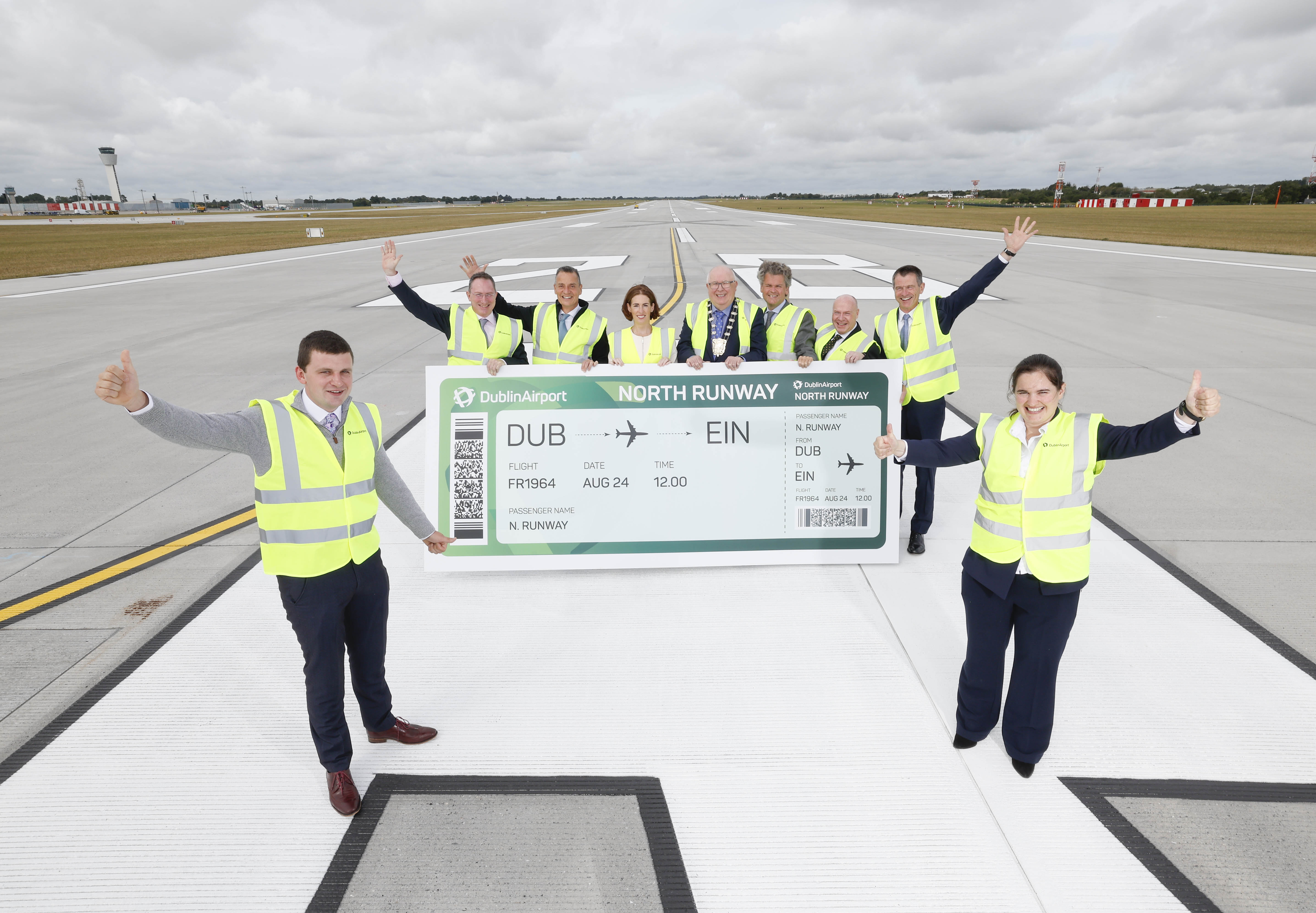 The recently constructed North Runway at Dublin Airport commenced operations today with the 12.00 departure of Ryanair flight FR1964 to Eindhoven.

The €320m North Runway (designated 10L/28R) and associated facilities were delivered on schedule and on budget by daa at no cost to the State.  The new runway, located on daa lands some 1.69 kilometres north of Dublin Airport’s existing South Runway, will support the creation of 31,200 new jobs and €2.2 billion in additional economic activity. The development of North Runway has been part of Dublin Airport’s long-term strategic planning and land use prioritisation since the 1960s, which has enabled delivery within Dublin Airport’s existing campus, substantially mitigating cost, disruption and limiting construction time.

North Runway fulfils a key mandate set by the Government’s National Aviation Policy, by enabling Dublin Airport to develop as an international hub for leading airlines and enhancing connectivity of Ireland’s island economy for the benefit of consumers, tourism and Foreign Direct Investment. North Runway will facilitate larger aircraft and connectivity with long-haul destinations as well as much needed extra runway slot capacity for short-haul flights during early morning and late evening peak departure and arrival periods.

North Runway is critical to Dublin’s growing position as a hub for travel between Europe and North America, in particular. Enhanced connectivity will mean a greater choice of destinations and airlines for business and leisure customers, as well as competitive fares. Ensuring Dublin Airport is attractive to airlines is vital to ensure aviation business is not lost to Ireland, with no other airport on the island having the route network necessary to support acting as a gateway between Europe and North America.

Speaking at a photocall held on the new runway, before the inaugural flight, Hildegarde Naughton TD, Minister of State at the Department of Transport said:

“The new North Runway will provide much-needed capacity and will enable Dublin Airport to re-build and enhance connectivity to our island, putting Ireland in a strong position to facilitate increased economic activity. The new runway is a crucial piece of infrastructure which will enable Dublin Airport to expand and provide the necessary capacity to connect key existing and emerging global markets.  I wish to commend all the hard-working staff and management at daa for completing such a key national infrastructure project within budget.”

“The opening of North Runway is an exciting milestone for Dublin Airport and Ireland, with the delivery of this once-in-a-generation piece of vital national infrastructure positioning Ireland for economic growth for many decades to come. The addition of North Runway will further enhance the role of Dublin Airport as a vital economic enabler for Irish tourism, trade and foreign direct investment. I am enormously proud of everyone who helped deliver this remarkable piece of aviation engineering both on budget and on schedule, ready to commence operation at a vital time for aviation and for Ireland.”

“North Runway further strengthens international connectivity for Ireland at Dublin Airport and will be a major driver for economic growth. It underpins our position as a leading European airport and a key gateway to North America.  The successful delivery of this project would not have been possible but for the planning and land use foresight of the early operators of Dublin Airport who envisaged this vital national infrastructure as far back as the 1960s.  Following the COVID pandemic, daa has a renewed ambition for Dublin Airport and its users. We are steadfast in our ambition to grow Dublin Airport sustainably and to be a standard bearer for quality service. Following on from the North Runway development, we will progress at pace our planned capital investment programme in a refurbished terminal, new piers, gates, stands and transfer facilities that will ensure a compelling service and lasting legacy for future generations of air travellers in and out of Ireland.”

North Runway was designed to be fully compliant with European Aviation Safety Agency (EASA) standards to ensure Dublin Airport can operate as a Category IIIB runway, capable of servicing larger, typically long-haul aircraft, up to and including Code F types (wingspans 65m to 80m) including Boeing 747-8 and Airbus A 380-800 aircraft.

The Boeing 737-8-200 aircraft used today for the inaugural flight on North Runway is one of a growing number of next generation aircraft operating at Dublin Airport that is up to 40% quieter than previous models whilst also burning less fuel.

The increased use of such aircraft is an important step in lessening the impact of airports on their local communities. The recent decision by Fingal County Council to amend and replace two conditions associated with the planning permission for Dublin Airport’s North Runway provides for the limited extended use of the new runway at key late-evening and early-morning busy periods and includes a generous insulation grant scheme for eligible local residential properties. It also provides for the replacement of a night-time aircraft movement cap with a more considered noise management quota system that encourages the use of quieter aircraft, an industry-standard approach for managing aircraft noise at large international airports around the world. This will be complemented by further noise mitigation and enhanced monitoring measures. The planning decision helps provide the operational flexibility required by Dublin Airport to enable the regrowth and development of international connectivity at Ireland’s main gateway.