How To Build A Runway – Part 2 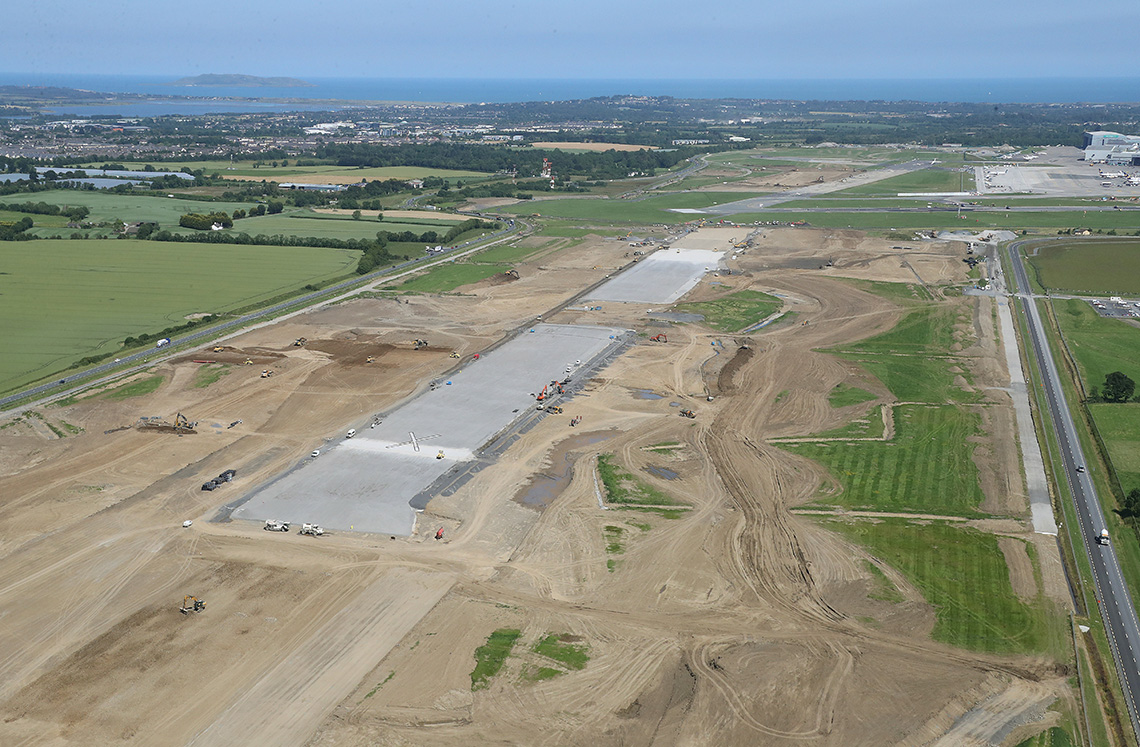 In part one of this series, we looked at the preparatory works including road realignment, perimeter fencing and site clearing that took place in the initial phases of the runway project

Once the topsoil on site has been removed, the next stage is to fill and then compact the earth to establish a strong bearing stratum. A stratum is a layer or a series of layers of rock in the ground.

This ensures that the runway and taxiway structures are strong enough to withstand the heaviest aircraft that will land at Dublin Airport – potentially the B777-900 a long-range, wide-body, twin-engine Boeing 777 that seats 414 passengers and has a range of over 7,525 nautical miles (13,936 km).

Once the construction team is satisfied with the strength of the foundation layer of the runway and taxiways, a layer of geotextile membrane is added. This membrane separates the bottom soil layer and the layer of granular subbase which is laid on the membrane.

Subbase is the name given to the layer of material laid on the foundation level. It is the main load-bearing layer of a pavement and can consist of crushed stone, concrete, or slate.

Drainage will play a key role in the operation of North Runway and the next step in the build is to install drainage systems for the paved areas.

This includes collection and carrier drainage systems that will take any rainwater away from the runway and taxiways.

This water will be piped to a flow diversion chamber where the quality will be checked. If it is of an acceptable quality, it will be allowed to flow, in a controlled manner, into existing watercourses.

If this is not the case, the water will be diverted to a holding tank where it will be held until diluted to levels acceptable to Irish Water and delivered to its network.

Finally, after the drainage system is installed, a layer of lean mix concrete is added to the subbase it is then topped with a layer of pavement quality concrete which will complete the runway structure.

Pictured: Looking East with Dublin Bay in the background from North Runway.