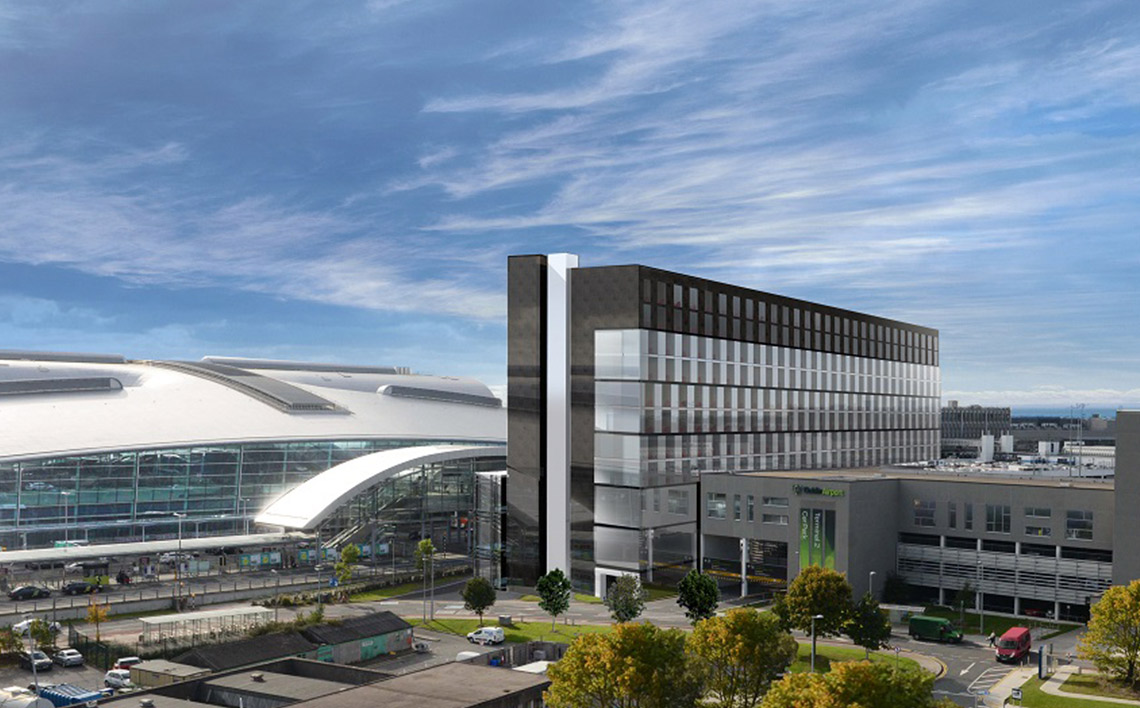 daa is seeking expressions of interest for a company or consortium to design and build, finance and operate a new 400-bedroom terminal-linked hotel at Dublin Airport.

The new four star plus hotel, which will be located on a site directly linked to Terminal 2, will be one of Ireland’s largest hotels. The hotel will be operated by the winning bidder for 100 years before being transferred back to daa.

daa currently has planning permission for a 402-bedroom hotel on the site, which is located between T2 and the adjacent multi-storey car park, but this permission runs out in March 2019.

The public tender process is open to Irish and international companies or consortia and daa is seeking an upscale four star plus hotel with a global brand.

“This is a unique opportunity to build and operate a new terminal-linked hotel at one of Ireland’s premier locations,” said Dublin Airport Managing Director Vincent Harrison.

“Dublin Airport and the greater Dublin area both require additional hotel beds and this hotel development will bring significant economic benefits both to the local Fingal area and to the greater Dublin region,” according to Mr Harrison.

Dublin Airport is Ireland’s key international gateway and is a large town in its own right; with more than 19,200 people directly employed on the airport campus or nearby. “There is significant demand for a new hotel at Dublin Airport and international research shows that terminal-linked hotels generate better room rates than those that are not directly linked to a terminal,” Mr Harrison said.

The new hotel, which will be funded by the winning bidder, will be located on a prime 0.81-acre site just 95 metres from Terminal 2 situated between T2 and the T2 multi-storey car park.

CBRE has been retained by daa to seek expressions of interest for the project. “We are expecting strong interest from both Irish and international consortia,” said Dave Murray, Director, CBRE Hotels. “As a terminal-linked property, this will be the flagship hotel on the Dublin Airport campus, which will give it a significant trading advantage over its competitors as well as other planned hotel developments within the north Dublin area,” Mr Murray said.

“Adding more connectivity at Dublin Airport brings increased economic benefits for tourism, trade and foreign direct investment - not just at the airport, but throughout the country,” Mr Harrison added.

Dublin Airport is one of the most important economic assets in the country. It supports or facilitates a total of 117,300 jobs – including the 19,200 jobs on campus - and contributes €8.3 billion annually to the economy. The new hotel is expected to create about 250 new jobs at Dublin Airport when it opens, while a further 150 people will be employed during the construction phase of the project.

This summer, Dublin Airport will have flights to 195 destinations in 42 countries, operated by 56 airlines. A record six million passengers travelled through Dublin Airport in the first quarter of this year, which was a 4% increase on the same period last year.

Dublin Airport is now a major gateway for travel between Europe and North America, welcoming 1.8 million hub passengers last year. It is the 6th best connected European airport to North America this summer and is the only European city that offers US Pre-clearance service to passengers travelling to the United States.