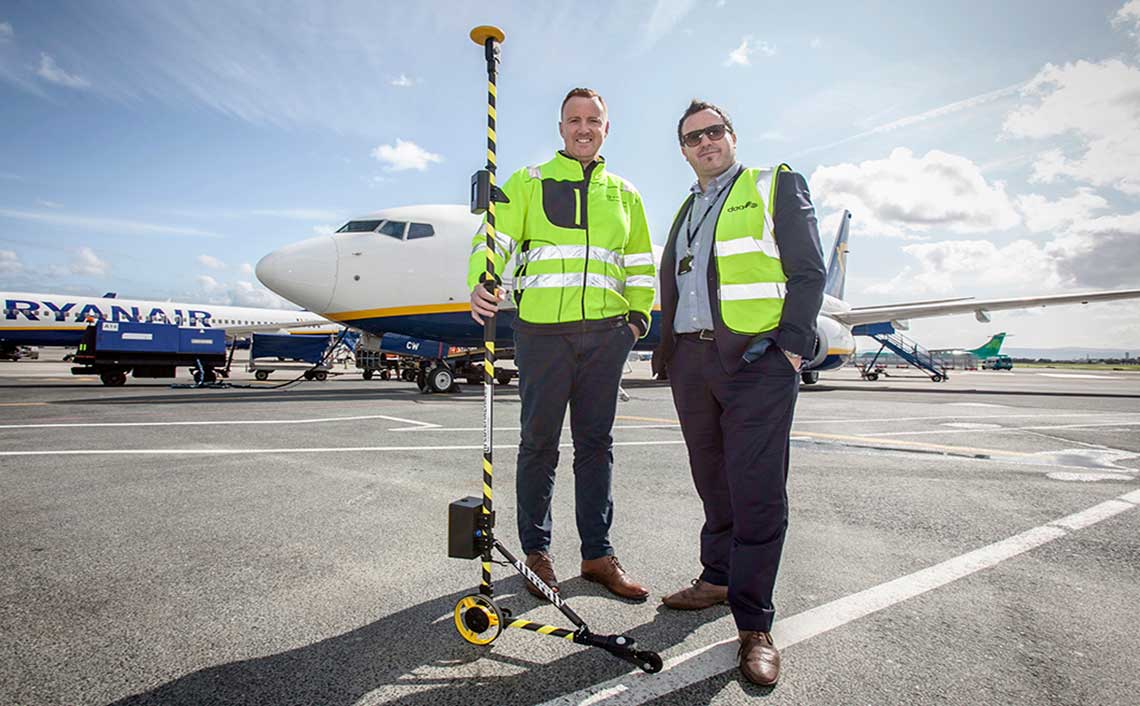 Share
Airport and tech start-up work together to deliver a global first.
Dublin Airport has collaborated with an Irish tech start-up company Cute Machines to produce a new device that revolutionises the measurement of light levels around aircraft parking stands.
The device which was developed through Dublin Airport’s participation at a Hackathon at DCU, reduces the time needed to check each parking stand’s light levels from 40 minutes to just two and a half minutes.
This means that parking stands don’t have to be taken out of service to complete the check and the efficiency of the airfield is therefore significantly improved for the benefit of airlines and the travelling public.
Being able to accurately measure light levels at aircraft parking stands is an essential safety requirement at airports. The intensity of light is measured in units of lux and the new Lux-O-Meter is a world-first in the aviation industry.
“The Lux-O-Meter is a huge leap forward,” said Dublin Airport Asset Care Airfield Supervisor, Sean MacKessy. “It’s made an essential safety check faster and more efficient and allows Dublin Airport to have stands back into service much quicker than previously,” he added.
Aircraft parking stands are illuminated from overhead by 20-metre masts to make sure that Dublin Airport complies with strict lighting regulations set down by the European Aviation Safety Agency (EASA). The regulation states that the lighting levels on aircraft parking stands must conform to a certain standard measured in lux. The lighting levels are recorded at each parking stand to confirm compliance and these results are regularly audited by EASA.
“Measuring and recording lighting levels was a challenging and labour-intensive task previously which could take up to 40 minutes per aircraft parking stand, and it was particularly difficult to do during harsh weather conditions when light fixtures are at risk of being damaged,” according to MacKessy.
The Lux-O-Meter uses a Light Sensor to measure the light level on the aircraft parking stand. GPS positioning is used to determine what stand the Lighting Survey will be performed on and the data is sent by mobile network to the operating platform where readings are recorded.
The Lux-O-Meter concept was developed following a Dublin Airport sponsored Hackathon event in DCU. MacKessy was a mentor at the event and struck up a relationship with Cute Machines who came second. The airport’s Airfield Asset Care team and Cute Machines then worked together to produce a more efficient, time-saving method of measuring the light levels around aircraft parking stands.
The creation of the new device has opened up potentially significant commercial opportunities for Dublin Airport through selling the Lux-O-Meter to other airports.
The Lux-O-Meter has also brought direct and indirect savings for the airport. “It saves a significant amount of time as lighting levels can now be recorded in two and a half minutes and automatically stored and more importantly, there’s no need to close an aircraft parking stand and this has a huge benefit for airport operations,” MacKessy said.
So far this year, more than 12.3 million passengers have travelled through Dublin Airport, a 7% increase compared to the first five months of last year.
Dublin Airport has welcomed an additional 764,000 passengers between January and May.
Dublin Airport has flights to almost 200 destinations in 43 countries, operated by 53 airlines and is the 11th busiest airport in the European Union.
Image above: Dublin Airport Airfield Electrical Supervisor Sean MacKessy and Head of Delivery Asset Care Ian Devine at an aircraft stand using the prototype Lux-O-Meter.